Hey all! Today’s post is showcasing a partial wall knockdown we tackled earlier this spring around the same time as the DIY walk-in closet project.

Our house is older (late 60s) and has a bit of a choppy layout, consequently making it so rooms don’t have the best flow between one another.  You saw a few years back we made our first attempt at solving the issue with this partial wall knockdown directly across from the wall that I am talking about today. That helped quite a bit, but I knew the wall across the way would have to be opened up as well to really achieve the “open concept” I was after (without tackling a full-blown remodel, that is!)

For reference, here’s how the space looked before we moved in with how the previous homeowners had it set up: 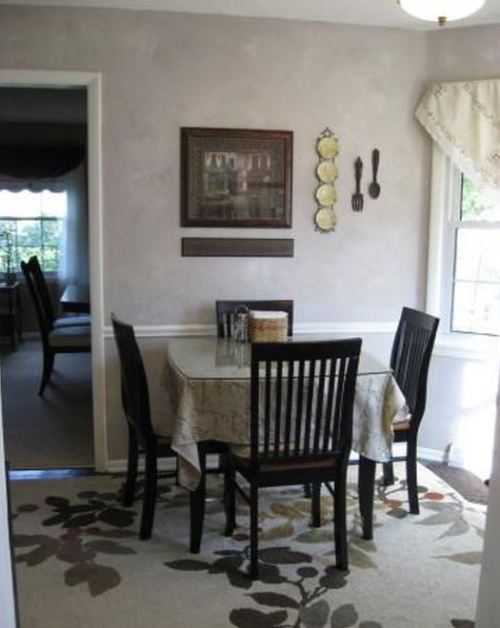 And here’s how it looks now that the wall has been knocked down:

^view from the eat-in kitchen

^view from the dining/living room

Here’s how this project went down…

After analyzing the wall, we decided to hire the project out to a local contractor. This was for a few reasons — 1) we didn’t know if the wall was load-bearing (turns out it was), 2) there were outlets on each side of the wall, meaning electrical was going to be running behind the wall, and 3) from the exposed studs in our basement utility room we could clearly see pipes running up into that portion of the wall, so we knew there was more than likely going to be some re-routing of plumbing pipes involved. All three of those factors made DIYing this wall project not an option.Sometimes leaving it to the pros is the way to go! 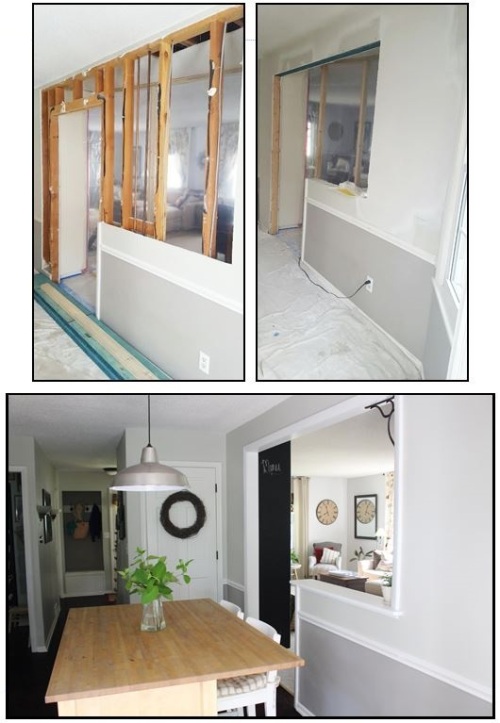 ^view from coming in the back entry

From the above pictures, you can get a general idea of the demo process. After exposing the studs behind the wall, a header was put it in and both electrical and plumbing were re-routed off to the right. Once the drywall was up, it was mudded and taped. It’s also worth mentioning that because we were taking part of a wall down and using a licensed contractor, our city rules state that we had to have a smoke detector hard-wired into the space which you can see in some of the photos below. In addition, we also had to have a lead test due to the age of the house (thankfully we we had no issues there!) While these were added costs we weren’t initially anticipating (welcome to home remodeling 101), they were safety precautions that were necessary and worth the cost in the long run.

The last part taken on by the contractor was installing the trim along with a ledge made to exactly match the one in our kitchen, making the two ledges feel cohesive. To cut costs, we opted to tackle the painting portion which was the very last step of the project. And for a “cherry on the top,” I added an old metal corbel to the right hand corner of the opening to add some character that I picked up from Dwell, one of my favorite local shops.

Now let’s take a look at the “after!” Here are some photos of the space in its newly open glory:

^view from the kitchen 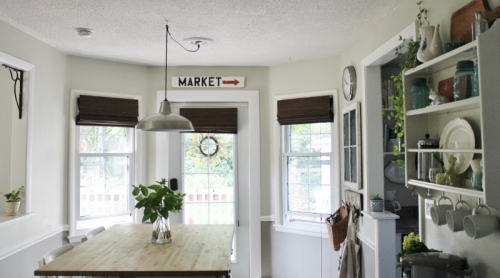 ^ view from the hallway

It’s amazing how much more open the connecting spaces feel from knocking down a relatively small chunk of wall. It’s also been an added bonus to have so much extra light be let into the dining/living space from the windows in eat-in kitchen area.

For fun, here’s a look at what the eat-in kitchen area looked like shortly after we moved in compared to today (click to enlarge):

The main changes include fresh paint, the two wall knock-downs on each side of the space, the addition of blinds, a new light fixture + ceiling medallion, and the fun “accessories” such as my DIY chalkboard window, DIY ‘market’ sign, and DIY key/coat hook.

Other sources from this space — IKEA island (no longer available, but here’s their most similar one currently for sale), IKEA clock, IKEA plate shelf, Target 3-tier metal shelving.

I realize I have yet to provide an update of the actual kitchen’s facelift we tackled that took place last August (almost a year ago already — what happened to the time?!) which included an install of new floors (out with the chippy beehive-style tile, in with dark and classy bamboo) as well as new appliances. So hopefully I can get around to posting that update soon along with the nursery reveal!