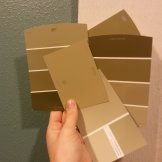 This has definitely been the “year of projects” at the Caban casa which has been making for lots of fun and exciting changes around our home. The issue? I haven’t been updating this blog with the deets! Once one project ends, a new one begins, or so it seems anyways. And who has time to document it all when you’re knee-deep in a DIY?! It also doesn’t help that my laptop copped out recently…

So rather than put each project posts out one by one, for now I am going to give a brief overview of what’s been done and what’s currently going on (you can see a few snapshots above, but I have more detailed pictured posts coming soon).

You saw some of the summer projects I tackled here which included a fire pit makeover, installing [the start of] a stone path along the side of the house + an arbor, adding patio lights, sprucing up the garage door with some hardware, and making a DIY nautical wreath for the front door. There were also some other things that weren’t documented like a few landscape updates and new house numbers.

Other projecty/DIY things that took place in the last few months or so:

So that’s my latest project recap in a nutshell. I look forward to updating you with some detailed photo posts soon. Until then, however, follow my Facebook page for updates as that outlet gets posted to much more often than the blog.